Can you tell which is which at a glance? Even otherwise tech-savvy folks like those at Ars Technica sometimes get it wrong. Once you understand the physics, you can tell which kind of scanner produced which image, at a glance.

The reflectivity of backscatter x-rays depends upon atomic number (or “Z”). The lower the atomic number the stronger the reflection and the brighter the image. Organic matter, like your body, is made of relatively low Z matter like carbon, oxygen, hydrogen, and nitrogen. This strongly reflects the X-rays yielding a brighter image. Lithium would also be a strong reflector. High Z materials, like most metals, will reflect poorly, showing up as dark splotches. Certain skin creams, like zinc oxide (used in sunscreen or baby diaper rash treatment), or titanium dioxide (also used in sunscreen) should reflect poorly. Iodine would also tend to be fairly absorptive. Lead should be particularly dark in an image. Here’s a really good technical discussion from one of the manufacturers’ web sites.

Here are a couple of images with which to test your new skill. Highlight the white font caption below each image to check your answer.

Incidentally, somehow the NIST image above made it into a “T-wave” graphic which was picked up by  Reason Magazine, The Daily Mail, and elsewhere. T-waves or “terrawaves”are even shorter wavelength signals that should behave like millimeter wave images but potentially with higher resolution. 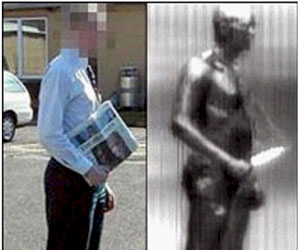 The brightest return comes from a metal knife hidden in the newspaper. Millimeter wave. Source: NIST

Here’s a really tricky one: 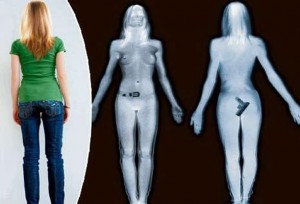 Looks like an x-ray scan with a ghostly white body and dark metal (gun and belt), right? Wrong. It’s a fake. Hair isn’t substantial enough to reflect X-Rays. Someone took a standard photo, inverted it, and modified it with the gun and belt. Also in “real”images, faces are automatically blurred. See here for details.

In most jurisdictions, it is legal to video record the police in public places where they would have no expectation of privacy. […]

The new 1099 mandate I previously discussed here is beginning to attract more attention. Currently, businesses submit 1099’s for every consultant or […]