I just attended the pre-release screening of Atlas Shrugged Part One, and I’d like to share my first impressions. Take this as an initial installment toward the much more thoughtful (but equally enthusiastic) review I’ll compose at leisure over the next few days and publish at the (fan-run, unofficial) Atlas Shrugged Movie Blog.

When I heard my favorite novel was being made into a movie, all the available omens boded ill: a “low-budget” production, with “no-name” stars, made independently – without the adult supervision of a real Hollywood studio, and rushed into production at the last minute to avoid loss of rights. It sounded like a recipe for disaster. Scratch that… it WAS a recipe for disaster. I mourned the might-have-been movie I’d been waiting my entire adult life to see. I regretted the lost opportunity. I averted my eyes to avoid the painfully unfolding train wreck.

Slowly the evidence began chipping away at my erroneous conclusions. 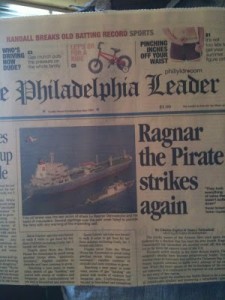 As filming wrapped, I came across an account of a visit to the set at the Soul of Atlas Blog. Seeing Ragnar Danneskjold in the headlines brought home to me the reality of the production, but I remained doubtful the producers could overcome the hurdles they faced. Months later, I encountered the Atlas Shrugged Movie Facebook Fanpage. Behind-the-scenes photos of the actors, the props, and the sets demonstrated that, however modest the budget, this was a serious undertaking with credible production values (Atlas Shrugged (Part One) – A Movie Preview). An inquiry through the Atlas Shrugged Movie Fanpage requesting permission to reproduce the photos led to an in-depth discussion with screenwriter Brian O’Toole (Interview with Brian O’Toole, Screenwriter: Atlas Shrugged-Part One). O’Toole impressed me as a talented writer doing his conscientious best. In collaboration with producer John Aglialoro, O’Toole brought his considerable skills to capture the essence of Ayn Rand’s novel and translate it to screen. I was “cautiously optimistic.”

I began to understand – as I should have from the start – that independence is a virtue. Ayn Rand’s challenging prose would never have made it through the filter of a major studio without having been seriously blunted and adulterated. The resulting film would have been a caricature, not a capturing of the novel.

Further, a modest budget enforces an austere simplicity that enhances, rather than dilutes the message. A film with the “big-name” stars variously associated with the project over the years would have been more about the stars than the story. I admit that, in my mind’s eye, I always envisioned an Atlas Shrugged movie as an elaborately stylized visual blending of 1930’s vintage art-deco technology and film noir set in a pseudo-1950’s world with hardboiled, chain-smoking heroes. The film I foolishly thought I wanted would have been a tragic mistake – a mistake that would have transformed Atlas Shrugged into fantasy and undercut the dramatic relevance of Ayn Rand’s ideas to a modern setting. The Spartan, contemporary production is set in the near future, but that quality only serves to make the message more relevant and the story the star.

The movie trailer teases, but cannot completely dispel the doubts of the hardcore skeptic. To me, the pivotal evidence should be the recently released clip of Hank Rearden and his family. In three and a half minutes, an entire chapter (Book One, Chapter Two: The Chain) is expertly distilled and adeptly depicted.

So, here’s the “spoiler” – the big secret of the movie I learned from my opportunity to attend the screening. The released scene is NOT a fluke. It is not an accident. It is a representative sample. The rest of the film really is that good – better actually, because the individual scenes compliment and reinforce each other to create a harmonious whole, true to Rand’s story, superbly executed, and well done. The casting was outstanding, with no weak links.

In honesty, there were a few aspects of the movie that disappointed me. Some of the technobabble was truly cringe-worthy (as a physicist, I may be overly picky).  The story was specifically set in 2016 instead of an arbitrary near future. The novel’s subtle mystery of vanishing producers became overly blatant and obvious in the film – but on reflection I might be persuaded that this was a good decision.  Finally, the movie was so fast-paced and action-packed that I had trouble absorbing it in the first viewing, despite my familiarity with the story. On the first viewing it was good. On the second viewing I liked it even better.  And yes, I do realize my two principal criticisms (too blatant while also being tough to follow) are mutually contradictory.  I’ll let it digest more to see if I can resolve the contradiction. In any event, these should be understood as minor quibbles. I give the film a solid “A” grade. The result is a tightly-told tale that strictly adheres to Rand’s vision while leaving the audience yearning for more.

Even those who disagree with Rand’s philosophy but still value the power of ideas and respect intellectual discourse should appreciate the remarkable story of how such an ideological movie came to be created. Atlas Shrugged completely bypassed the traditional Hollywood gatekeepers and their anemically plotted, special-effects-laden spectacles. By supporting the commercial success of the Atlas Shrugged movies, Rand’s critics could help create opportunities for their own independent movies of morals and films of ideas, produced without being diluted or softened by cautious studio executives.

Regrettably, I fear some of Rand’s foes won’t be rational enough to see it that way. The same critics who accused one of the twentieth century’s premier advocates of individual rights and freedom of being a closet Nazi, summoning victims to the gas chamber, will be hard at work distorting Rand’s ideas and decrying this movie. I predict the film will initially be dismissed as an inept soap opera or made-for-TV movie.

I trust to the rationality of Ayn Rand’s fans and admirers to see these criticisms for what they are. I also trust that those who value what Rand had to say can put aside differences to support one of the best opportunities in a generation to introduce a large audience to Rand’s ideas.

The choice to pursue an independent production meant a high fidelity adherence to Rand’s story, at the cost of a limited release outside traditional distribution channels. A wider scale release remains a possibility if distributors and theater owners perceive a viable market for the film. Some of the decision makers sat beside me in the theater. They are wondering if their customers are receptive to this film. Those decisions are being made right now. If you value what Rand had to say, now is the time to act. Sign up at the official Atlas Shrugged Movie website. Participate in the Facebook Fan Page community. Register your desire for a screening in your home town.

This post publishes as I take a red-eye flight home from a remarkable day’s long adventure – physically tired, but spiritually invigorated. I’ll provide a more detailed and substantial review in a few days. All my love and my profound thanks to Barbara for juggling both sets of twins as well as her baby bowl business on a particularly busy day so I could participate in this venture. I owe you one.

While a modern-day feudal lord prepares for marriage, his best man wrestles with his feelings for his friend’s bride and struggles to […]