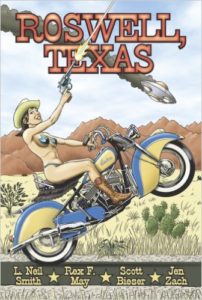 I’ve been promoting The Hidden Truth using online advertising. One venue supporting my ads is the graphic novel, Roswell, Texas, available online here, or for purchase from Amazon here. Written by L. Neil Smith and Rex F. May, and illustrated by Scott Bieser and Jennifer Zach, Roswell, Texas is an alternate history, science fiction account of the Roswell UFO landing set in a Republic of Texas that maintained independence.

In an alternative universe, Davy Crocket survived the 1836 siege at the Alamo, and Santa Ana did not. As a result, Texas remained an independent republic and never joined the United States.

In 1947, Texican President Charles A. Lindbergh learns that a flying saucer has crashed near the far west Texas town of Roswell. He dispatches his best friend, “Wild Bill” Bear, and three of his best Texas Rangers, to investigate. Our four heroes find themselves in a race against agents from the United States, the Franco-Mexican Empire, the California Republic, and the Third-and-a-half Reich, to find that crashed saucer and learn its secrets.

And when they do, they will change the course of history, again.

Check out this opinionated and fascinating science fiction romp if you would like to be well entertained for a few hours. 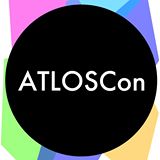 I’ll be presenting a talk, “So You Want to Be an Author” at ATLOSCon 2016 in Atlanta, Georgia, tomorrow. ATLOSCon draws attendees […]