In yesterday’s post,  FCC Overhauls Experimental Licensing to Favor Academia Over Industry, I explained how a recent Notice of Proposed Rule Making (NPRM) would offer academic researchers preferred status over researchers with non-academic affiliations. The NPRM justifies this discriminatory treatment on the grounds that that universities are “a powerhouse for ideas” and “have a record of generating the types of innovations and technological breakthroughs we seek to foster.” These claims are asserted with nothing more than anecdotal evidence. As I noted in a Comment filed earlier this week, wide-ranging studies of the origins of technological innovation show that industry, not academia is the principal fountainhead of innovation.

Perhaps the most comprehensive analysis in recent years was provided in Terrence Kealey’s The Economic Laws of Scientific Research. [1] Kealey concluded that “90 per cent of industrial innovation, and well over 95 per cent of industry’s profits through innovation, arise in-house from the industrial development of pre-existing technology.” The economist Edwin Mansfield did extensive work on the role of academic research in promoting technological change.[2] In a study of seven industries, Mansfield determined that only 11% of new products or processes could not have been developed without recent academic research (within the last fifteen years).[3] In other words, 89% of industrial innovations relied entirely on improvements to existing technology. Also, not all innovations are of equal economic significance. Mansfield also found that only 3% of the revenue from new products and processes came from innovations that relied on recent academic research. Earlier studies found similar results. In the 1960s, Project Hindsight surveyed the innovations behind military systems and found 91% followed from technology and only 9% from basic scientific research from academic or industrial scientists.[4]

These studies strongly suggest that the NPRM’s goals to “inspire researchers to dream, discover and deliver the innovations that push the boundaries of the broadband ecosystem”[5] are ill-served by an exclusive focus on academic and non-profit research. However, the studies cited above describe technology in general, not wireless technology in particular. It would be helpful to consider a case-study more narrowly focused on wireless innovation – a topic taken up in my next post.

And some additional links: 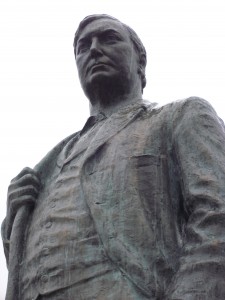 Great history books generally fall into one of two categories. The first category is a streamlined and essentialized rocket trip straight through […]

Martin Gardner died this week at the age of 95. Author of the long running Scientific American feature “Mathematical Games,” I will […]

One thought on “Academic Science and the Origins of Technology”