T-Mobile needs to add capacity to its San Fransisco Bay Area networks. The Boy Scouts have a camp on an elevated site perfect for a tower. And a little cash to keep their camp maintained wouldn’t hurt, either. T-Mobile offered to pay $2200/month for a 30-year lease to the tower site. All seemed fine until the neighbors got wind of this insidious plot to expose children to those dangerous cell phone signals. Details are available from the New York Times.

Apparently, cell phone antennas are only safe if cleverly disguised so antennaphobes don’t realize they are there. Botanist Wayne Armstrong provides an extensive field guide to these cell phone “trees.”

Paranoia about the alleged dangers of cell phone antennas has been with us since the introduction of cell phones in the 1980s. Certainly RF power has the potential to cause health problems. Exposure to extremely high levels of RF power can “cook” you just like, well, a microwave oven. Cell phones are carefully designed, however,  so that the RF power absorbed by a user remains far below the threshold of significant thermal heating. The first cell phone “specific absorption rate” (SAR) standard followed from noting that the smallest measurable temperature increase that could be reasonably detected was a change of 0.05 deg C in a cubic centimeter sample of tissue. They took one tenth of that as the safety standard.  And the power levels from a cell phone tower 100 feet away are far far lower still than the levels from a hand-held phone adjacent to one’s skull. Nevertheless, the subject continues to be studied.

Earlier this week the results of yet another cell phone safety study came out. After spending $24M and surveying 13,000 users over ten years, the results were (once again) that the danger of cancer from cell phones was “not established,” but we should give the researchers more money to be really, really sure:

In a decade-long survey of nearly 13,000 people across 13 countries, the WHO’s International Agency for Research on Cancer (IARC) determined that most cell phone use did not lead to an increased risk of either meningioma, a common but typically benign form of cancer, or glioma, a rare but more dangerous type of brain cancer.

The study results, released Monday, did see “suggestions” that using cell phones for long periods of time on the same side of the head could lead to an increased risk of glioma, especially around the temporal lobe. However, the authors acknowledged that possible biases and errors from those participating in the survey meant that these results were not conclusive enough to directly blame cell phone radiation for such tumors. For example, people were asked to try to keep track of how often they used their cell phones and on which side of the head over a period of 10 years.

“An increased risk of brain cancer is not established from the data from Interphone,” Dr. Christopher Wild, IARC’s director, said in a statement. “However, observations at the highest level of cumulative call time and the changing patterns of mobile phone use since the period studied by Interphone, particularly in young people, mean that further investigation of mobile phone use and brain cancer risk is merited.”

A summary of the study, coordinated by the International Agency for Research on Cancer, is available in a press release from their website. Ironically, the study also found a correlation between cell phone use and a REDUCTION in the incidence of some cancers.

“A reduced OR [odds ratio] for glioma and meningioma related to ever having been a regular mobile phone user possibly reflects participation bias or other methodological limitations. No elevated OR for glioma or meningioma was observed ≥10 years after first phone use. There were suggestions of an increased risk of glioma, and much less so meningioma, in the highest decile of cumulative call time, in subjects who reported usual phone use on the same side of the head as their tumour and, for glioma, for tumours in the temporal lobe. Biases and errors limit the strength of the conclusions that can be drawn from these analyses and prevent a causal interpretation.”

Yet another study to follow 250,000 cell phone users over decades started last month.

The FCC has a RF safety FAQ but it lacks much actual detail.  For a lengthier discussion, I recommend the FCC’s Questions and Answers about Biological Effects and Potential Hazards of Radiofrequency Electromagnetic Fields. A more detailed and more recent research paper is available here. If you care to peruse the other side of the argument, here’s the web site of one of the community groups opposing the Boy Scout Camp cell phone tower.

“OK,” you may be saying. “But would you really want your children going to school in the shadow of a cell phone tower just two hundred feet away?” Actually, they do. And I didn’t give it a second thought. The cell phone tower next door to my children’s school is about 120ft from the playground and the entire building lies within 200ft or so of the perimeter. But the single most important reason why I do not worry about low level (sub thermal) cell phone signals causing cancer follows from some basic physics that will have to await another day’s post. UPDATE (8/18/2010): Einstein’s Nobel Prize: Proving Cell Phones Can’t Cause Cancer

UPDATE: Another particularly insightful commentary is available from Orac at Respectful Insolence.

My company has a summer intern program for undergraduates. A good number of resumes pass through my inbox. But I have never […]

The 29th Progress in Electromagnetics Research Symposium (PIERS) will be held March 20-23, 2011 in Marrakesh, Morocco. They always seem to pick […] 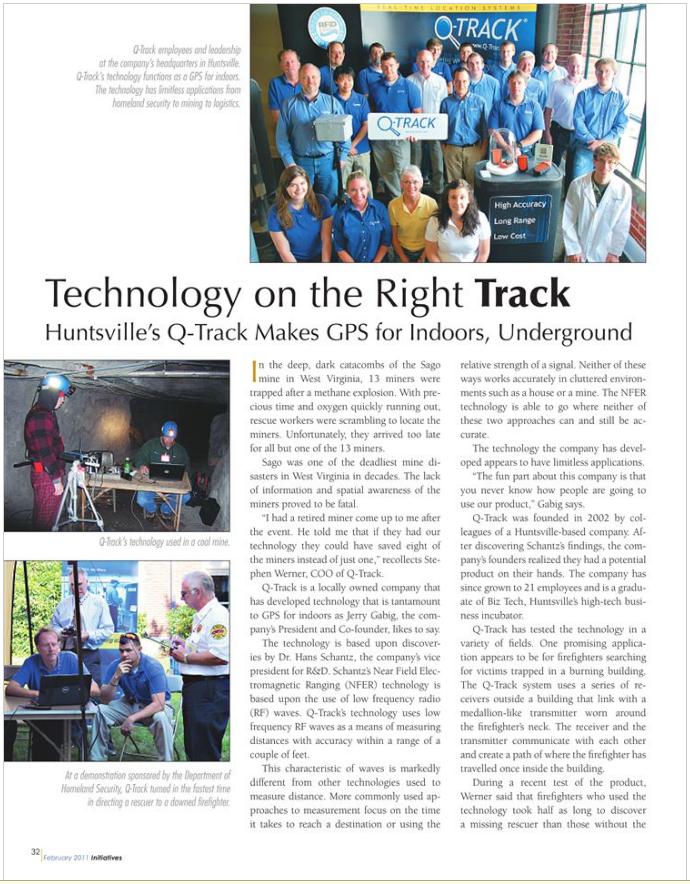 Initiatives Magazine had a nice article about my company, Q-Track, and the many applications of our Near-Field Electromagnetic Ranging (NFER®) Real-Time Location […]