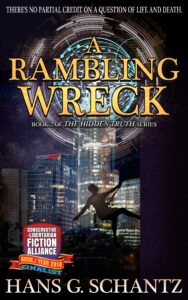 Off to college for the education he’ll need to defeat the guardians of the hidden truth, Peter must infiltrate a deadly conspiracy, thwart a social justice takeover of the school, save his professor from assassination, and somehow find time to study for finals.

The stakes are now higher than ever. To succeed, Peter must discover who burned down the Tolliver Library, find new allies in his fight, and secure the assistance of the legendary George P. Burdell himself.

“This is really such an original series of books that it’s hard to describe it properly. Like Da Vinci Code meets Harry Potter meets Cryptonomicon by way of Michael Crichton. The author really knows his science and tech AND can spin a fantastic tale.”  -Bookhorde July 9, 2017

“It’s sort of like what might happen if one of Heinlein’s juvenile heroes (say Kip from Have Spacesuit Will Travel) was thrust into the modern era and was forced to use SJWs Always Lie as his freshman orientation guide while battling the Black Hats.” -Orion’s Cold Fire

“I tell you, just like the first story, it is a Stupendous and hard-to-put-down Super Techno Thriller of the finest kind. The kind you can’t hardly find, and yet, here it is, just waiting for you to jump right in. So, go and get it! You’ll be glad you did!” -Ken Holder, L. Neil Smith’s The Libertarian Enterprise July 2, 2017

“Great follow on to the Hidden Truth. The author weaves science and reality into a really enjoyable novel. Worth your time.” D.L. Olson

“The adventure shifts from small town Tennessee to the campus of Georgia Tech. Our young detectives move on to college as they take advantage of an SJW scholarship to further infiltrate the enemy. The book is an interesting mix of detailed science and vacuous social justice nonsense.” Dave Carver

“Captivating, complex and utterly gripping. I highly recommend this book for all readers of hard science fiction. This book incorporates the real world and fiction so well I have to remind myself that it’s fiction.” Lisa Phillips

“A vast conspiracy to control history in an alternate timeline very similar to the ‘reality’ we all know and love is uncovered in the suppression of obscure discoveries in the physics of electromagnetics in the past. Written by a Ph.D. in theoretical physics and an antenna expert in the vein of the classical libertarianism of Robert Heinlein, this volume two of the “Hidden Truth” series is great fun for fans of alternate reality SciFi stories.” MX_Cat

“This series is a bit of Golden Age science fiction which somehow dropped into the early 21st century. It is a story of mystery, adventure, heroes, and villains, with interesting ideas and technical details which are plausible. The characters are interesting and grow as they are tested and learn from their experiences. And the story is related with a light touch, with plenty of smiles and laughs at the expense of those who richly deserve mockery and scorn. This book is superbly done and a worthy sequel to the first.” John Walker