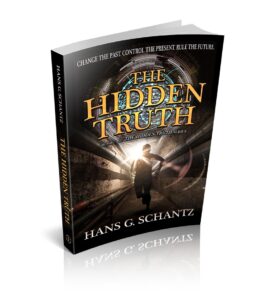 They’ll do anything to hide the truth.
When high school student Peter Burdell uncovers a subtle clue in a dusty book buried deep in a forgotten Appalachian library, he realizes someone altered history. Who’s been lying, and why?

His discovery lands Peter in the cross hairs of the deadly Cabal whose Deep State agents changed the past to control the present, so they can rule the future. Aided by family and friends, Peter races against the odds to expose the conspiracy and uncover the answer to the most important question of his life:

What is The Hidden Truth?

Hans G. Schantz’ THE HIDDEN TRUTH is most highly recommended.
It is a gem of a book, a rare find, combining a charming coming of age story, diamond-hard science fiction speculation, a conspiracy thriller, a touch of trenchant political commentary, and, uniquely, a challenge written into a science fiction book of the reigning scientific orthodoxy of the day….
This trilogy works on several levels. In style, theme, in social commentary, in genre, in plot-weaving and world-building, the craftsmanship is top-notch.
Stylistically, it is written in the same journalistic prose as a Heinlein juvenile, but, frankly, is better. Not only are some of Heinlein’s more dubious moral lessons absent, the work attempts something more ambitious: introducing a real theory of physics in the midst of a fictional adventure yarn.
Thematically, it is a bracing and inspiring coming-of-age story telling young readers and reminding older readers what it means to be a man, a man of integrity, in a world where no one is there to dig you out of a mess.
It works as social commentary. As in a Heinlein juvenile, there are memorable quips and trenchant observations about political realities peppered throughout the dialog, which have as much application in our world as theirs.
John C. Wright

It features the kind of plot and twists that might be ruined by a reviewer revealing too much, but I will say that if you enjoy “alternative histories” you’ll probably enjoy this one; alternative futures are of course a staple of science fiction, and that may be another way to describe the background of the book….
The Hidden Truth is trying to do something in the world, and it entertains at the same time. I’d like to talk to you about its ideas, and recommend it.
Robert Pearson

Welcome to the homepage for The Hidden Truth. In an alternate timeline, the 9/11 attack killed President Gore and the government instituted comprehensive and pervasive surveillance. A conspiracy rewrote history, subverted science, and corrupted society. The Hidden Truth tells the story of how a young man discovers subtle hints and clues of the cover-up. Then, he must rally his friends and family to figure out the hidden truth, before the conspirators can figure out who is after their secrets.