In his guest post last week, The Rise and Fall of UWB, Kai Siwiak traced the history of wireless – from the original wideband spark transmissions, to narrowband carrier signals with compact modulations, coming full circle back to spread spectrum and ultra-wideband signals. This history is correct in its description of wireless technology, yet overlooks the stated motivations and goals of early wireless practitioners.

Early radio was actually narrow band in conception, and UWB in practice solely due to the limitations of RF technology. This narrow band thinking manifests clearly in an article by vacuum tube pioneer and early radio visionary, Sir William Crookes.

To set the stage, Heinrich Hertz conducted his famous experiments characterizing radio waves in 1886-1887. This work would not be translated into English until the publication of his book Electric Waves in 1893, just before his untimely death. And yet visionaries  were already thinking ahead to how it would all work in a practical implementation.

Rays of light will not pierce through a wall, nor, as we know only too well, through a London fog. But the electrical vibrations of a yard or more in wave-length of which I have spoken will easily pierce such mediums, which to them will be transparent. Here then, is revealed the bewildering possibility of telegraphy without wires, posts, cables, or any of our present costly appliances. Granted a few reasonable postulates, the whole thing comes well within the realms of possible fulfillment.

The narrow band thinking is evident in Crookes’ description of selecting a particular wavelength (or equivalently a particular frequency):

Any two friends living within the radius of sensibility of their receiving instruments, having first decided on their special wavelength and attuned their respective instruments to mutual receptivity, could thus communicate as long and as often as they pleased by timing the impulses to produce long and short intervals in the ordinary Morse code.

This, in fact, was the thinking behind the development of the “syntonic” or tuned radio circuit by Oliver Lodge a few years later. Crookes emphasized the practicality of his vision:

This is no mere dream of a visionary philosopher. All the requisites needed to bring it within the grasp of daily life are well within the possibilities of discovery, and are so reasonable and so clearly in the path of researches which are now being actively prosecuted in every capital of Europe that we may any day expect to hear that they have emerged from the realms of speculation into those of sober fact. Even now, indeed, telegraphing without wires is possible within a restricted radius of a few hundred yards, and some years ago I assisted at experiments where messages were transmitted from one part of a house to another without an intervening wire by almost the identical means here described.

This remarkable article [Crookes, William, “Some Possibilities of Electricity,” Fortnightly Review, February 1, 1892, pp. 174–176] is available online from United States Radio History, a wonderful compilation of original source material and commentary on the subject.

The damped sinusoid waveforms and spark gap transmissions of early radio systems may have been UWB in practice, but that was only because then existing radio technology did not allow the early radio pioneers to create their intended narrow band radio implementations.

John Herman Randall described Aristotle’s scientific investigation as “the passionate search for passionless truth.”  Many histories of science fail to capture the […] 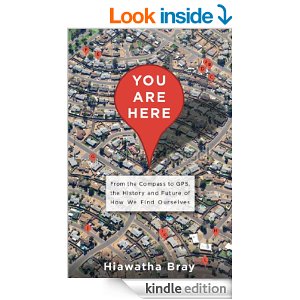 A few updates: The FCC has granted Garmin’s request for an extension of the waiver allowing transmission of digital GPS coordinate data […]

DecaWave has joined the ranks of companies offering UWB-based real-time locating systems. Here’s a video showing a demonstration of their system. DecaWave […]