The last couple of weeks were action packed. Two weeks ago, I spoke at the Texas Wireless and Microwave Circuits and System Symposium at Baylor University in Waco (see my post “Demystifying Electromagnetic Superposition“). Last week, I joined the Q-Track team in Orlando for RFID Journal Live, our industry’s leading trade show. Q-Track came home from the show with the “Coolest Demo” award enabled by our remarkably precise NFER® indoor location system. In this post, I’ll share some of the story behind what we did and how and why it worked.

I arrived the night of Monday April 7, because I was scheduled to deliver a tutorial on Near-Field Wireless Technology to the folks at the co-located 2014 IEEE International Symposium on RFID Tuesday afternoon. That night, I got the word that the rest of the Q-Track team, our CEO Steve Werner, and our new Marketing Director, Chad Ludwig, would be delayed due to weather-related flight disruptions. They would not be able to arrive until an hour or so after the show’s opening reception, so the burden was entirely on me.

I spent Tuesday morning getting our booth set-up and our demonstration system deployed. It took me about an hour to unpack all our boxes and set up the pop-up booth backdrop. In another hour, I was able to get three receivers deployed in and around our booth and connected to the laptop computer that would be our tracking server. It took me a little more than an hour to walk around the tracking area taking calibration points to characterize the signal perturbations caused by the tracking environment – principally the building structure and the wiring. Then I confirmed that the system was working properly by walking around the tracking area with several NFER® Tag Transmitters deployed around my belt and the “history trails” function enabled to leave a trail on the screen. When one of our indoor location systems is working properly, you can see the difference in location of the “left” and “right” tags by observing the slightly offset paths in the tracking display. Everything checked out perfectly. Although the job would have been faster and easier with help, it wasn’t beyond the ability of a single person to get the Q-Track NFER® RTLS system up and running in relatively short order.

I ran off to get changed – the organizers do not turn on the AC in the Exhibit Hall until just before the show starts – I had lunch, and I presented my tutorial. Finishing a bit early, I returned to our booth in the Exhibit Hall to fire up the demonstration.

This has always been a moment of some trepidation. At the first show Q-Track attended way back in 2006, we had a beautiful demo set up and calibrated with some of our earliest prototype equipment. We shut everything down, and then turned it all back on right when the trade show opened up. The tracking showed embarrassingly large errors. I had to hurriedly recalibrate the system while my colleagues distracted our potential customers. Finally everything worked again, and we could show it off. But then a while later, tracking would deteriorate again, requiring another panicked round of recalibration. We spent half our time at the show tracking, and the other half recalibrating the system. In retrospect, we were being bit by thermal drift. Our system relies on very precise phase and amplitude measurements. Electronic circuits behave a bit differently when first turned on, i.e. cold, than they do after they’ve been running for a while, i.e. hot. Between the variations in tags and receivers, it was tough to get consistent performance for more than an hour or two at a time.

But with several generations of hardware improvements and years of additional experience under Q-Track’s collective belts, those days are behind us. When I fired up the demonstration system for the opening reception of RFID Journal Live, everything worked perfectly – exactly the same as when I’d last checked it that morning.  We advertise 40cm rms accurate tracking. Our demonstration was probably delivering even better than that, although I was too busy to perform a detailed accuracy check.

Not long after the Opening Reception began, Steve and Chad arrived to help me handle the crush of opening night visitors interested in our demonstration and curious about our products. In fact, we were so busy that Steve didn’t get a chance to try out the drone until the next morning. The Parrot AR.Drone Quadricopter survived shipping and worked well. The control datalink for the drone requires a 2.4GHz wireless connection. With so many vendors trying out their wireless products, it was difficult getting a reliable connection. Steve’s demonstration worked best at the beginning and end of each day’s session when interference was at a minimum.

The technology that enables the The Parrot AR.Drone Quadricopter is remarkable in and of itself, but what made our demonstration really fly was Q-Track’s new, lightweight QT-701 Tag Transmitter. Weighing in at only 50 grams, the QT-701 Active Tag enables the same 40cm rms accurate tracking as our larger, more ruggedized industrial tracking tags, but in a compact form-factor suitable for everyday office use.

The other remarkable feature of our demonstration was its robustness. We were up and tracking for the entire duration of the show with no more than a momentary interruption. Naturally, that’s what you’d expect from a commercial indoor location system. But obtaining that kind of reliability is extremely difficult in the hostile RF environment of a trade show. With so many vendors operating so many devices, reliable wireless links are challenge to maintain, if they can be established at all. In fact a couple of our much larger competitors had much larger footprints and much fancier displays on the trade show floor. But neither was able or willing to try to demonstrate a working location system at the show. I think that fact was influential in the decision making behind the “Coolest Demo” Award.

Q-Track’s “Near-Field Electromagnetic Ranging” (NFER®) indoor location systems offer an effective, if unconventional, solution to many indoor location problems. My Q-Track colleague and co-founder, Bob DePierre, and I came from an ultra-wideband (UWB) RF background. We saw first-hand how UWB location systems could be quite accurate with a line-of-sight between a tag and a receiver, but as soon as the direct path was blocked, accuracy began to degrade. Try to go through a wall or two, and it becomes very difficult for a UWB system to get a good fix on your location. Short-wavelength and high-frequency microwave systems work great if you need to send lots of data, but location systems just require getting a signal through a complicated and cluttered environment with minimal distortion or degradation.

Bob and I left our then employer to pursue a different path. We reasoned that low frequencies were the way to go. Low-frequency, long-wavelength signals bend around or penetrate through obstructions much better than comparable high frequency signals. And when the wavelength is much longer than the distance of the link, you don’t get the kind of cancellation and fading you see in high frequency short wavelength signals. I discovered a variety of techniques for using “near-field” physics in localization, and Bob reduced them to practice by building the hardware to prove that my ideas would work. In a matter of a few months, we had a prototype that could track a little red wagon up and down Bob’s driveway to an accuracy of a few inches.

Today, our NFER systems operate at around 1MHz under FCC Part 15 rules for unlicensed low-power transmitters. With a wavelength of 300m, they deliver 40cm rms accurate tracking. Typical ranges are around 15-20m (45-60ft). In a particularly noisy environment (like the Exhibit Hall) range may be as short as 10m (30ft). In really quiet settings (like many retail or warehouse environments) range may be up to 30m (100ft).

Below is a great screenshot of our NFER® indoor location system in action. We deployed three QT-555 Locator-Receivers and we were tracking about a 40ft x 60ft area around our 10ft x 10ft booth with the 40cm rms accuracy typical of NFER® real-time location systems. The system can accommodate up to 84 tags simultaneously at a 1Hz update rate, but we were never using more than four or five at a time. You can see solid, repeatable tracking on the inside loop of me (blue trail), Chad Ludwig (orange trail), and Steve Werner (green trail). Note the head shot “avatars.” I looped the outside edge of the tracking area – you can tell the system was having some difficulty because the update rate slowed down a bit (i.e. the space between the blue dots showing the location fixes got bigger). Finally, I walked the perimeter of three 10ft x 10ft squares and their diagonals to highlight the precision of our tracking. Ultimately, our system ran for the duration of the show with no tweaking or adjustment needed.

In the final hours of the show, we heard an announcement that the Awards Ceremony was beginning. While we were excited about how well our location system was performing, the broader world of RFID encompasses many other interesting and useful applications. And no one from RFID Journal had been by to hint that we needed to attend. Chad and I were surprised when someone came by to tell us we’d won. By the time Chad could get to the stage, Steve, who had been walking back to us after meeting with a potential customer, arrived to collect the award. Chad captured this shot of Steve holding the award and me holding the drone.
The show ended at 3pm on Thursday. We broke down the tracking demonstration and the booth and flew home that night. I made it home around midnight.
Now we’re looking forward to the challenge of an even cooler demo at 2015 RFID Journal Live in San Diego. What would you propose we do with a robust accurate tracking system on the Exhibit Floor of a trade show? Leave your ideas and suggestions in the comments.

This morning at 11:00 am, I will present a forum in the Embassy Suites Redstone Room at the 2016 Huntsville Hamfest. I […]

Some updates on items previously discussed or mentioned on AetherCzar: The “Froot Loops” plaintiff also had a law suit alleging false advertising.  […] 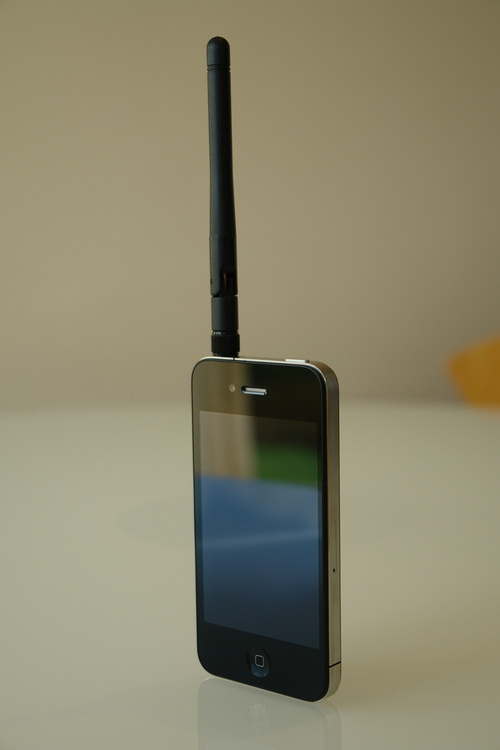 Gizmodo’s latest scoop – photos of a prototype iPhone 5 with improved antenna.This is a spoof, but it does raise interesting questions […]

Apple will hold a press conference later this morning on the iPhone antenna problem. This comes in the wake of a Consumer […]