Under optimal conditions during daylight hours, direction finding (DF) accuracy could be as good as one to two degrees (300m at 10km range). [[1]] At night, however, the ionosphere reflects distant signals from over the horizon. The resulting “skywave” signals have a mix of vertical and horizontal polarization components that can confound DF systems by introducing phase offsets. DF error could increase to as much as 30 or even 90 degrees at night. [[2]]

In 1918, a British Army Officer, Frank Adcock (1886-1968), devised a solution to this problem “in which the aerials, which have identically the same dimensions, are so mounted and connected that only the vertical parts are effectively influenced by the electromagnetic radiation, the horizontal parts, or those parts having a horizontal component, being so arranged that the effect on them is eliminated or reduced to a minimum.” [[3]] The Figure shows two embodiments of Adcock’s array. Later testing by the Marconi company indicated that a well designed Adcock array could achieve three degree accuracy, even at night. [[4]]

Interestingly, Adcock was a classicist working as a cryptographer when he devised this common-sense configuration. He went on to teach classical history at Cambridge and was co-editor of the Cambridge Ancient History for which he wrote ten chapters. 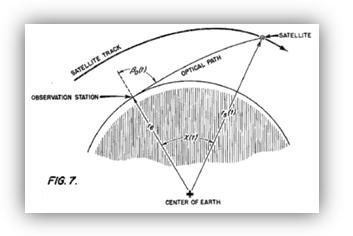 With the launch and tracking of Sputnik in 1957, it soon became obvious that the location of the satellite could be tracked […]