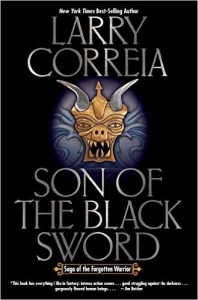 Corrupt forces nudge a young man to become the preeminent enforcer of law in his society, but when he discovers the secrets of his origin and the lies on which his society rests, he has to chose between loyalty to the law he swore to uphold and his honest assessment of the world in which he lives.

It’s a complicated plot to distill down to a single sentence. Correia’s tale is full of clever twists and turns that should be experienced, not disclosed in a review. On the deepest level, the plot distills down to the conflict between one man’s incorruptible integrity and his honest assessment of the world in which he lives. Forced to serve as a pawn, the hero undermines his enemy’s schemes through his unyielding determination to do the right thing at all costs.

Correia’s writing continues to mature and improve with experience. His Monster Hunter series is good, his Grimnoir Chronicles are excellent, and Son of the Black Sword is truly outstanding.

Never start a land war in Asia. Never go in against a Sicilian when DEATH is on the line. Now I need […]

For over fifty years, Ayn Rand’s best selling novel, Atlas Shrugged, defied attempts to capture it on film or video. Now this […]