I didn’t have time to address a few additional points in my previous post on creativity and innovation. In this post, I wanted to sumarize the evidence underlying my claim that most of innovation results from industry reworking, improving, and advancing existing technology and not from the direct application of basic research.

Perhaps the most comprehensive analysis of the origins of innovations in recent years was provided in Terrence Kealey’s The Economic Laws of Scientific Research. [1] Kealey concluded that “90 per cent of industrial innovation, and well over 95 per cent of industry’s profits through innovation, arise in-house from the industrial development of pre-existing technology.” The economist Edwin Mansfield did extensive work on the role of academic research in promoting technological change. [2] In a study of seven industries, Mansfield determined that only 11% of new products or processes could not have been developed without recent academic research (within the last fifteen years). [3] In other words, 89% of industrial innovations relied entirely on improvements to existing technology. Also, not all innovations are of equal economic significance. Mansfield also found that only 3% of the revenue from new products and processes came from innovations that relied on recent academic research. Earlier studies found similar results. In the 1960s, Project Hindsight surveyed the innovations behind military systems and found 91% followed from technology and only 9% from basic scientific research from academic or industrial scientists.[4] 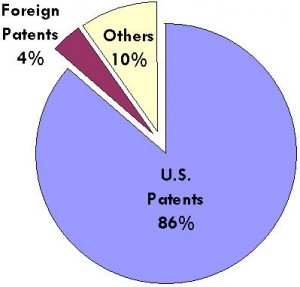 AetherCzar surveyed the sources cited by the top ten most referenced U.S. patents in RFID. The vast bulk were other patents – 86% U.S. patents and 4% foreign patents.

However, these studies cited above describe technology in general, not wireless technology in particular. It would be helpful to consider a case-study more narrowly focused on wireless innovation.

The realm of Radio Frequency Identification (RFID) offers a closely analogous case study for understanding the relative importance of academic versus industrial research. The RFID industry has matured to become a large and growing industry.  ABI Research estimated the RFID market will total $5.35B in 2010 with growth to $8.25B by 2014.[5]

A recent study surveys 3,952 RFID patents from 1983 to February 12, 2008. [6] Of the top twenty assignees by patent issued, all are industrial concerns, and none are academic institutions. [7]Of the top ten RFID inventors, all are affiliated with industrial concerns, and none are academicians. [8]Of the top ten most cited RFID patents, three were from Micron Technologies, two from IBM, one each from Intermec, Lucent, Checkpoint Systems, Texas Instruments, and E-Tag Systems Inc. – again, no academic institutions.[9]

The inventors of each of the most significant RFID inventions relied on a certain body of pre-existing science and technology on which they built their invention. These inventors had not only a moral, but also a legal obligation to provide a full-disclosure of the closest, most relevant prior art. [10] The prior art associated with the ten most cited RFID patents was overwhelmingly other patents: 86% U.S. patents and 4% foreign patents.  Of the remaining 10% of sources cited, most were trade journals and newspapers. Only about 3% were academic publications. Following is a table of the most cited RFID patents:

As is usual in the development of a new technology, there are multiple contenders for the title of inventor of RFID. In 1973 Mario W. Cardullo was co-inventor on a patent [11] describing the first RFID system employing digital memory – the ancestor of modern RFID. [12] Mike Davis argues [13] that the honor should go to John R. Wiegand who first invented a digital read/write proximity RFID system. [14] In either case, the fundamental innovations underlying RFID were due to entrepreneurial researchers at relatively small businesses while larger, better capitalized businesses undertook the job of perfecting, improving, and applying RFID in larger scale deployments.

The experience of RFID highlights an important point: small businesses often play a critical role in fostering fundamental technological innovation. According to a study by the Rand Institute, “There is a general rule of thumb that radically new technologies are usually developed, marketed, and matured by new companies. With some exceptions, making bold technological and product line shifts is difficult for established companies, which usually prefer to evolve along the established lines that have been successful for them in the past.”[15]

My research on academic versus industrial science arose from my FCC Comment I filed a couple of years ago, described in “FCC Overhauls Experimental Licensing to Favor Academia Over Industry.” Some of the contents of this post were originally published in:

Auburn University recently announced that the RFID Research Center will be moving to Auburn from the University of Arkansas. Here’s a summary […]

The Air Force launched a satellite with hyperspectral imaging capabilities this weekend, according to Popular Science. Hat Tip: Glenn Reynolds.