Maxwell first published his famous equations describing electricity and magnetic one hundred fifty years ago. In honor of the anniversary, ÆtherCzar will discuss some interesting and not always appreciated aspects of Maxwell’s Equations. Previously, ÆtherCzar considered the question, “Is radiation divergenceless?” Today’s topic: Radiation of a DC Signal?

The last post in this series demonstrated that radiation field lines form closed loops. Understanding that radiation fields have neither source nor sink leads relatively painlessly to another basic principle of UWB systems. The complete time integral of a radiated waveform must be equal to zero. Expressed mathematically,

Suppose one attempted to excite an antenna so as to create a radiated waveform whose field intensity had a net positive excursion. Such an excitation would require an antenna current that did not return to zero at the end of the radiation. Thus, the antenna voltage would have to continue to grow, a process that could not continue forever. The figure illustrates what radiating a “dc impulse” implies for antenna current and voltage. 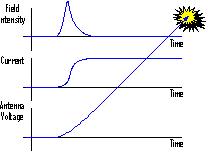 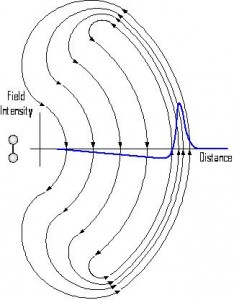 This morning, I will present a talk, Energy Flow in Reactive Fields, at Newcastle University, hosted by the Newcastle Electromagnetics Interest Group. […]